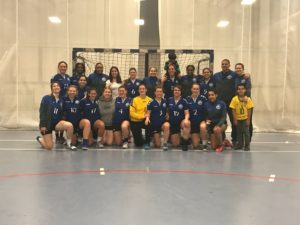 February 25th was a memorable day in many ways. After cheering for the guys on Saturday, on Sunday it was our turn to put on our handball shoes and show Boston how handball is played. Since we were hosting this tournament for the league, we finally had the opportunity to invite our friends and family (or for all our au pairs: host families;)), to show them why we spend so many hours practicing at the gym in Roxbury. A historical amount of 21 (!!!) girls signed up for the tournament, which meant that unfortunately not all of us could play all three games. But we had 3 tough games on the schedule, so for us it just meant that we could run and fight even harder.

The first game against West Point Gold was solid. You should never underestimate the physical strength and ability to run of West Point, but in no time we were a few goals ahead and it gave us the chance to work on specifics in defense and different styles of playing. Also, the new Brazilian front, Marina and Fernanda made their first appearance in a game, together with Lovisa, our first Scandinavian player. All three girls immediately proved their value for the team and helped us winning the match: 25-16.

Most of us were quite nervous for the second game against NYC, and that’s a big understatement. Our last encounter at their tournament didn’t go so well and we lost big time, so we wanted revenge and we knew it was going to be extremely tough. We started amazingly strong. Good defense, strong attack, a lot of patience, and to our own surprise after a few minutes we were five goals ahead. Unfortunately, after our great start, we lost our focus and that is something you should never do against NYC (or if you want to give your coach a nervous breakdown/heart attack). At the break we had exchanged our decent lead and were behind a few goals, and thereby Amir had lost his voice. Even though we kept fighting, in the second half we were not able to turn the game around. We came closer and closer, found our confidence back and with the amazing support of everyone on the bench, we kept fighting for a positive result, but in the end they turned out to be too strong: 24-21. However, we stepped of the court with a good feeling! We are getting closer to their level, and as a team we will work even harder to get a shot at beating them at nationals!!

The last game against West Point Black was again a physically tough one. These girls know how to play handball and they work out for a living, so we’d better be ready to fight. And we were ready. With good team-energy and great, strong defense we could celebrate playing with each other, and you could see that we have been making progress in practice. A special role for Julia, who was on fire while she had her family cheering on the side, and scored multiple goals, one of which is even caught on tape (hopefully we can add it to the website). The game resulted in a decent win, happy faces from our side, and an amazing feeling in the team. We have worked so hard in practice, and it is nice to see that you can see the results in the games. We have 2 more months to get ready for nationals..