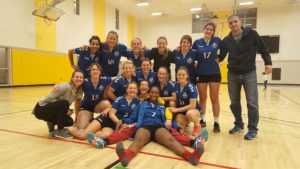 The first tournament of the season is always a source of excitement and healthy distress. After three months of hard work, our women’s team with a new coach, new players and new plays that come along, was being tested in West Point last Sunday. On the menu (besides some salad, carrots, apples and chocolate)? Two games: the University of North Carolina (UNC) and our friends from the capital, DC Diplomats.

After the usual drive with the classic car selfies, pee stops and snoring, our impressive team of 16 players arrived safe and sound in West Point. A quick motivational speech from Coach Amir before the warm up and the day is launched. A routine for some of us, unusual for others. Against UNC, instructions are clear: don’t get trapped in their rhythm and… run fast breaks ! The game starts intensively. A solid 5-1 defense doesn’t let anyone through, positioned attack is efficient and more importantly, fast breaks are working. Rapidly the gap is made and rotations start. When it is not Maike who shows our opponent some one-on-one skills, Julia is running and scoring like crazy from the left wing after great passes from Audrey. The entire team gets to play and our handball newbies Elise (aka Zizi) and Fanny enter their first game. Almost everyone scored, confidence and team spirit are there! Honestly, could you think of a better way to start the season?
Final score: 31-8.
Time to get some rest, food and last minute advice, while watching our next opponent.

The second game is against Washington DC. Although they have a few new players, the core of the team remains. They finished ahead of us in both the league and at Nationals, so the challenge awaits. Tension is present, few balls are lost and they rapidly lead 2-0… Fortunately, nothing too worrisome since we have Lucie to close our goals stopping two penalties in a row and a Binta/Lucy combo to open theirs. Defense stays solid. Bruna deprives DC’s dangerous pivot from every ball and Annika cuts off the left wing. Slowly but surely the gap widens and it is an Audrey on fire who compensates for Binta being taking out by an opponent defender. With a difference of 6 goals and a strategic time out from our brilliant coach, the first half ends. There is a lack of words to describe how happiness, determination and focus were blending together. But we weren’t there yet! It is fully committed that we got back on the court, nobody wanted to let this game go. The second half started with the same vehemence. With an impenetrable defense and danger brought by the entire team, we got into their minds. While Ivania was flying on both wings, Chloe had some great breakthroughs, Fanny caught tricky passes and Zizi blocked and scored her first goal ever from the pivot. Proof of the steady engagement of the team, the
final score: 13-24.

Thanks to great training/coaching from Amir, coaching support of Nataliya, the awesome job of Lucie in the goal and a very strong team spirit, this day was a success. Full of smiles and joy, it was great to see our high commitment at practice rewarded after our tough Nationals last year. Now, back on the court! We have to confirm in just two weeks.