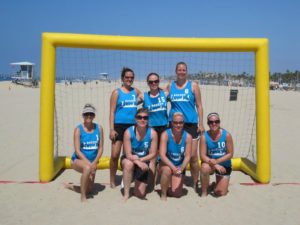 Each year Boston’s players can’t wait for the summer season to start because summer means one thing: beach time! Every weekend, the players of Boston meet in Revere Beach, MA to enjoy several hours of beach handball fun, while attracting a large crowd of fans and spectators. Boston had great summer weather which meant that team could use the break between games for a dip in the ocean. A favorite event of the club in the summer is the Annual Swim and Sportsfest in Flanders, NJ; it’s a grass tournament that attracts team from all over the East coast. The teams traditionally play beach handball on grass at this tournament and are left a little to their own fate. Four women’s teams and even more men’s teams showed up to play matches for two days in a friendly, relaxed atmosphere until rain brought the tournament to an early end Sunday afternoon.

While this may have been the summer highlight for the Boston men, the Boston women had their sights set on something or someplace else: California. The women had a special plan on their agenda for the summer: Beach National Championships! Multiple running and fitness sessions under the lead of drill instructor Sarah were alternated with training at Revere. Sleeveless jerseys were ordered in summer color. Tans were perfected. Former player My Forsberg was recruited from Sweden. Everyone was hyped and ready to go!

Then Boston learned of some devastating news: Beach Nationals were cancelled! What now? Graciously, the local host offered to let Boston participate in their local tournament at Huntington Beach, CA, yet there was one caveat: it was a men’s tournament. Flights had been booked, hotel rooms reserved, cars rented, and the Boston ladies were left with the question of whether to continue on their quest. The answer: Of course! Not quite knowing what to expect, Boston headed out to Cali, got ready for a girl’s-night-out themed weekend, and made the very best out of an almost cancelled trip.

The Boston ladies’ first opponent of the tournament was from Las Vegas, and each player was about twice the size and strength of any Boston player. You could see the doubts on the women’s faces: what were they thinking entering a men’s competition? As soon as the game started, Boston recalled upon what they had practiced all summer long and outran the men’s team while using their wit to set up goalie players for pivotal 2 point goals. Boston managed to keep the lead over time, and, soon enough, the whistle blew for the half: Point for Boston! By the second half Boston had won over the crowds, and the smiles returned to their faces. The half was a tough fight of strength vs. speed that ended with a point for Vegas team. Both teams were tied and a shootout was required to determine the winner. Boston and Las Vegas lined up for a sequence of penalty shots and produced a winner: Boston ladies! The rest of the tournament was history in the making!

Thanks to the hosts of LA Team Handball for letting Boston play in their tournament, for setting up several co-ed games, for the great organization, creating a welcoming atmosphere, and for an awesome weekend in SoCal!