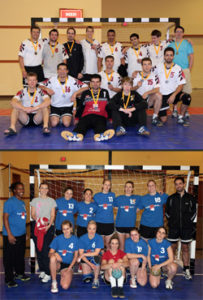 Las Vegas hosted the New England Freeze men’s and women’s teams for the 2010 USA Team Handball Championships. This year, the nationals were special in many ways. It was the last tournament for the club under the name ‘New England Freeze’ (the team is now registered as Boston Team Handball), for the first time in many years, there was a deterministic qualification process for the Men’s Elite-8 pool to which NEF made it, after four Northeast League Tournaments in the regular season, and, to cap the long season of hard work, the men’s team took 2nd place and the women’s 4th place at the nationals! The Freeze reached the semi-final after finishing second of a group gathering Atlanta, Houston and San Francisco. The semi-final, against the 2009 champion of the USA, New York City, was won after a thrilling extra-time and a goal at the very last second scored by Marco Betsch. Los Angeles won the title despite a tough fight the Bostonian team put up. This is the best result in the clubs history. It demonstrated the ability of Boston to compete with the best teams of the US, and is a true reward for all the efforts that were given by the players and the club’s members throughout the season. Thank you to all the fans around the world for their support during this unforgettable adventure 2009-10.